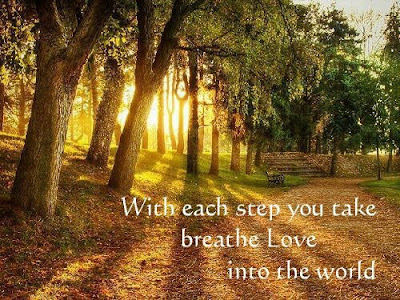 Monday, September 17-Tuesday, September 18, 2012
Rosh Hashanah (Jewish)
Begins previous sundown at 6:00 pm. Observed for two days. Literally, "Head of the Year" marks the first and second day of the Jewish New Year and the anniversary of the creation of the world.

Wednesday, September 19, 2012
**Ganesh-Chaturthi (Hindu)
This day commemorates the god Ganesh, one of Hindu’s major deities.  Ganesh is known as the ‘Remover of All Obstacles’, and is called upon at the start of all new undertakings.

Wednesday, September 26, 2012
Yom Kippur (Jewish)
The Day of Antoment is the holiest and most solemn of all days in the Jewish year.

Saturdayday, September 29, 2012
St. Michael and All Angels (Christian)
This feast, also known as Michaelmas, is associated with the beginning of autumn and the shortening of days because it falls near the equinox.  St Michael is one of the principal angelic warriors and was seen as a protector against the dark of night.

Monday- Sunday, October 1-7, 20112
*Sukkot (Feast of Tabernacles) (Jewish)
Sukkot celebrates both the harvest, as well as the 40 years that the children of Israel wandered in the desert.  Sukkot is one of the three major holidays, together known as the Shloshet ha-Regalim (three pilgrim festivals), and represents historically when the Jewish traveled to the Temple in Jerusalem.

Tuesday, October 9, 2012
*Simchat Torah (Jewish)
This joyful holiday, “rejoicing the Torah” marks the beginning of the year-long reading of the Torah.  The Torah, which is also known as the Five Books of Moses, means "teaching," "instruction," or "law" in Hebrew.

Tuesday, October 16-Tuesday, October 23, 2012
**Navaratri (Hindu)
This translates as ‘nine nights’, starting on the new moon and ending on Dussehra.  This celebration is dedicated to the goddess of Durga who had nine incarnations and has the power to destroy demons.

Sunday, October 23, 2012
**VIJAYA DASAMI (Last day of Navaratri)
This festival is celebrated on the tenth day of the Hindu month, Ashwina, and is the last of the 10-day annual festival of Navaratri. The festivities celebrate the victory of the forces of Good over Evil. It is also considered a day to begin new things in life.

Friday, October 26-Monday, October 29, 2012
**Eid-al-Adha (Feast of the Sacrifice) (Islam)
Including the Hajj, this three-day festival celebrates Abraham’s test of obedience to Allah (God) when he was asked to sacrifice his son Ismael.  At the last minute, Allah replaced Ismael with a lamb.

Posted by Dixie@dcrelief at 5:44 AM 4 comments: 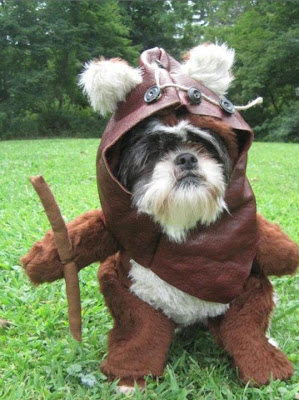 Inside my mind was a brilliant blog... waiting to be typed. Waiting to be consigned, and confined to the screen of word pad. A totally hysterical piece of work; I was already snickering with delight. But then I awoke and the said idea had left me.

My dream contained an adventure to go on. Far, far away and across the universe. But where exactly did I go and what did I do? Those were after all the main points of the story. The problem I'm having at the moment is listening to Aerosmith (in my head) singing: "Walk this way." Yet the photo is of an Ewok... what's the deal? Hmmm? E-wokked this way?

There are times when I'd love an adventure. Not the big travelogue stuff, but just a small overnight excursion. I might even possibly meet a tall, dark, and handsome stranger. And he would help me to use comas correctly. Oh no, now the Moody Blues are singing, "I know you're out there somewhere." Mind you all of these songs come up into my brain at the drop of a word. Does anyone else have this problem?

Finally I thought(smile) that maybe I would share a recipe. Wok this way?! I really have no desire to develop what cooking skills I have. Let's face it: whatever it was that I sat down to type has gone and refuses to reappear. I could use this as a description of how Fibromyalgia woks the cognitive skills. It takes all my thoughts and tosses them like a salad. Physically, it's like having the flu 24/7. "We're gonna wok, wok, wok, around the clock tonight."(Stop the music.)

So, there you go. If you're confused after reading this just think about where I'm at. And if you have any idea  'where' that is, leave a comment to let me know. Until then I'll pull on my boots... yes you know... "These boots were made for wokking."

Well it's not funny, yet what I wrote is the truth. Thank you! 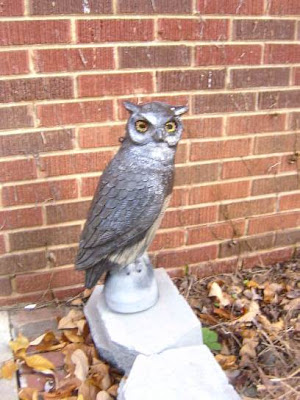 Admittedly it was a great summer with some serious crops. My buddy, my pal, and all-round sidekick had a killer garden. I was a little bit of help; mostly helped myself to eating whatever grew. Also I painted an old plastic owl and he was menacing looking.  The treasure of the garden. (Maybe not.) 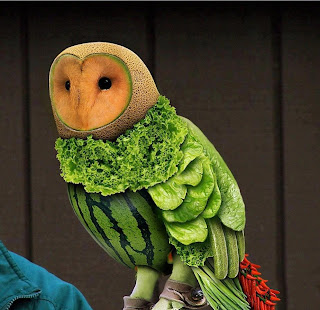 Ah, the fruit of the labor!  True treasure.

And now ~ for our next amazing trick ~ winter veggies. I'll keep you posted.

Posted by Dixie@dcrelief at 9:57 PM No comments:

we came, we saw, we moved 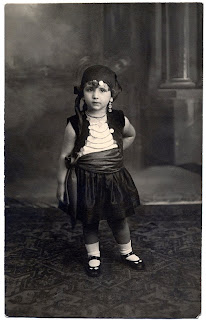 No, this is not a Halloween costume. Besides it's still September and I have a complaint to lodge with the world. Why don't people respect Gypsies? We're smart, we're happy, and most are pleasant to gaze upon.

You may think I'm a child 7-8 years of age? It's an old family secret and I'm actually 32. Many sights I've seen over the years... lived allover Europe. If someone gets chosen to be rejected or evicted we seem to be first choice. 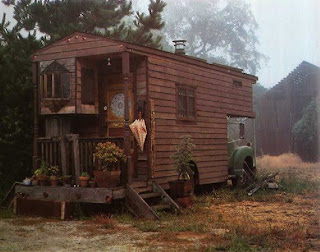 Then again, most  of us have homes that are mobile. I bought this little camper when I was 27; already had the truck. The tires are kept in good shape for times when I have to leave. Like the recent Olympics in London. In 2007 we were all moved to a temporary site with a "promise" of a new home soon. The Olympics have come and gone and we're still here. No view in sight of a "promised" home. Seems someone forgot about our agreement.

Well, that's the way  it goes. For some of you, the following video might seem a bit over the top. I link to it to let you know that things have not changed very much. We still have a "Queen of the Gypsies." Long live the Queen! And we still seem to flush out the rudest people. Have a watch... bye-bye for now.

once upon a time... but only once 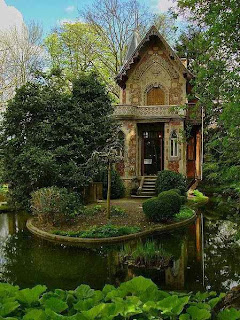 Once upon a time a wicked  ______   lived in the graveyard.  I had to pass the graveyard every day, twice, to get to school. In fact I had to go that way, all twelve years of my educated days. But whatever it was, I only saw it once... upon a time.

My mode of transportation was always via bicycle.  My first was a shiny black with big silver accessories. Every bike I saw I wanted. It became an obsession. At twelve years of age I had a plan; delivering newspapers to all the neighbors. Every new subscription won me a bonus. Every neighbor I saw I wanted, but I could only sign them up once... upon a time.

The graveyard had a little door. I stood there knocking on it, calculating the costs for daily delivery; dollar signs ($$) in my eyes. A raspy voice answered my knock, "What do you want little boy?" Immediately in my mind, appeared hundreds of bikes I'd coveted over the last few years of my young life. "I'm selling subscriptions for the daily newspaper. I can start delivering tomorrow. Would you be interested?"

'Raspy' answered, "You're talking about paper, but you want bikes?" I began to shake a bit; how did the voice know that? "By the way," Raspy asked, "are you the one who's been hitting my door with a newspaper? You have no idea how much that echoes through the cemetery; enough to wake the dead I tell ya!"

"I apologize. It won't happen again." Won't happen again; what an idiot! Yes, I did say that once... upon a time. Raspy took the paper after she/he made me peek at her/his form for two seconds. (Silent scream)

Until the day I was in a hurry to celebrate Halloween. I rushed my route to get home and change into a scary costume. It was going to be great. And my Dad was bringing home my new bike!! (I felt like howling at the moon.) Simply forgetting that I was on the last leg of my route I began slinging out newspapers and hitting porches, pooches, and doors... doors... uh-oh...once.... upon a time. Pedalling as fast I could from the cemetery... oh no... I was home and safe. I hadn't been turned into a toad or something worse.

OH Halloween, here I come. Home to the new bike! It was fabulous. I rode to the party, doing 'wheelies' and 'burn outs'; basically showing off. At midnight the bike disappeared from under me. One minute I was riding and the next minute, I was laid out on the ground. It was the same thing every year after that. Every Halloween, no matter what bike I rode to a party, collecting treats, or playing tricks, the bike I was on would disappear!!

I'm just an old man now and I met a former mate; we chatted about childhood days. He used to travel the neighborhood every Christmas and sell candy. The most popular choice were the fiery hot balls that you suck on. Your mouth explodes into pain! He told the tale of knocking at the cemetery door. A hideous creature answered, ordered the fire balls and lost it's voice. Since then every Christmas is devoid of candy in his stocking. It just disappears. (That got me to thinking about all the Christmas candy, over the years, which had shown up in my Halloween bag of treats!? However I kept my mouth shut; surely it wasn't that once... upon a time thingy? 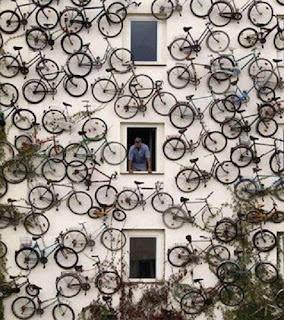 I told him about my luck and the many, many bicycles. He cocked his head a bit to the left and asked, "You met Raspy?" So there it was out... I felt relieved knowing someone I knew knew about that creature. "Yes," I replied, "Why do you ask?"

"I've got your bicycles!" Sure enough, on the backside of the hotel he inherited from his Grandfather, were lots of bicycles. I knew them all. But there was one missing, hm? My mate and I decided to take a ride to the cemetery.... just once... for old time sake. And there found the last bike I ever owned... once... upon a time! 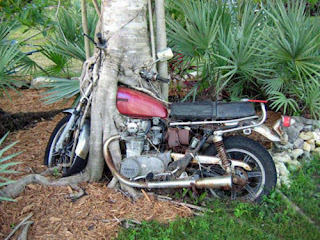 I now own a candy store right next to my friend's bike shop. And Raspy... what happened to she/he?  I don't know. Besides that was once upon a time... but only once.

The end. Thanks for reading this true tale, made up entirely by myself.