To the Women of Africa 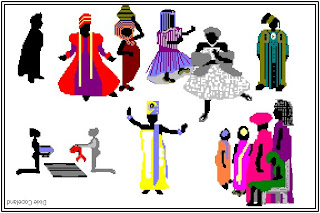 Any time I get the chance I look at all of the zines that speak of Africa and the many nations that compose her, I imagine Africa like a golden harp of many strings and the heart she has, is playing slower. I am sad for her; for us.

I drew the picture on my computer many years ago At that time I believe it was Rwanda being made to suffer and disintegrate. I drew powerful women in the picture hoping to attract the power that only women know how to use. Women have always known how to comfort a child, bury a soldier, lead a village, pray for those in need, and dispense funds fairly.

Ah, but these are also the very reasons why women do not have the power; would they be fair? Or would their own words and actions convict them of the atrocities they would delineate to the men? Are we ready for all secrets to be revealed; probably not. There are just as powerful women with lousy attitudes as there are men: "Give me, give me, give me."

Anyway I had this lofty notion of including specific people and maybe some one would notice or if they didn't that was okay. In the top left corner was Maya Angelou; beside her a rich Black woman of New York, a water bearer, a young girl dancing at a wedding, Oprah Winfrey in white cocktail dress and grey cashmere stole... and the top right corner from a National Geographic, a woman just named the tribal chief, because there were no more men to pull from for the position; they all died in battle.

Across the picture bottom two young girls are doing the right thing; they are sharing. The priestess in the middle is struggling to learn her husband's trade... that of blessing people. The bottom right corner has a long line of women waiting to receive care packages for the children; they're husbands are also dead. The young woman in the green dress and head scarf sat down to rest after a very long walk. She was last in line for the day, but died, before they could get to her.

So I ask every country... is this what you want for all? Is there no satisfaction? When will there be enough blood on all of our hands?

I watch the antics of gang wars in my community and wonder, "When did I hurt you?" "When did I enslave you?" "Why do you want all that I have when I'm willing to share?"

I listened to Darfur insisting they would off-load what they needed because there was no trust for the United States. Then the press release of forty countries showing up there and wanting Darfur to concede some issues? What is wrong with this? It is wrong for 40 countries to show up empty-handed! It is wrong that there should be strings attached to the receipt of any supplies they need!

This confirms something very important: You'd better hope the United States never needs help from the world's community! Not only will we not get it... we won't deserve it!