A carousel of celebrations 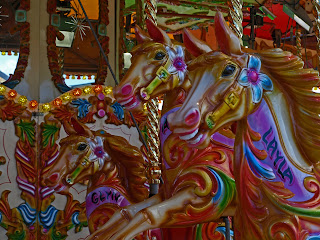 Thursday, November 1, 2012
All Saints Day (Christian)
This day honors known and unknown saints.
Monday, November 12, 2012
*BIRTH OF BAHA’U’LLAH (Bahá’í)
Born as Mirza Husayn’ Ali, into one of the leading noble families of Persia in 1817.  His Arabic title means ‘The Glory of God’.
Tuesday, Novemberber 13, 2012
**DEEPAWALI (Diwali) (Hindu, Sikh, Jain)
This is the start of the Hindu New Year.  It symbolizes the victory of good over evil.  It is also known as the “Festival of Lights”, where lamps are lit to symbolize hope for humanity.
Thursday, November 15, 2012
**Al-Hijra (Islamic New Year) (Islam)
This observance takes place on the first day of Muharram, the month that Muhammad emigrated from Mecca to Medina in 622 CE (the Hijra). This holiday is also known as Muharram.
Sunday, November 24, 2012
**Ashura (Tenth of Muharram) (Islam)
Ashura in Arabic means “ten”, signifying the 10th day of Muharram in the Islamic calendar and marks the climax of the Remembrance of Muharram.

Sunday, December 2, 20112
Advent (First Sunday) (Christian)
The Christian Church year begins with advent (meaning coming or arrival), which is also a time when Christians prepare to celebrate the birth of Christ.
Sunday, December 8, 2012
Bodhi Day (Rohatsu) (Buddhism)
This day commemorates the date of Siddhartha Gautama’s realization and presentation of the Four Noble Truths.
Sunday, December 9-Sunday, December 16, 2012
*Hanukkah (Fest of Lights) (Jewish)
In approximately 164 B.C, the Maccabees, a small group of Jews fighting for religious freedom, won victory over the Syrians.  Upon returning to the Temple, they found only one jar of oil to light the eternal light. In spite of the shortage of oil, the eternal light stayed lit for eight days. A special eight-branched candelabrum known as a menorah is lit over this period to celebrate the eight day miracle.
Tuesday, December 25, 2012
Christmas Day (Christian)
On this day, Christians honor the birth of Jesus Christ over 2000 years ago.  This is the most widely observed Christian festival of the year.  People celebrate it by exchanging gifts, decorating homes and communities with lights and ornaments, and attending parties and meals.
Tuesday, December 25, 2012
Eastern Orthodox Christmas (Eastern Orthodox)
Members of the Eastern Orthodox Christian Church celebrate the birth of Jesus of Nazareth on this day

Posted by Dixie@dcrelief at 8:23 AM 6 comments: