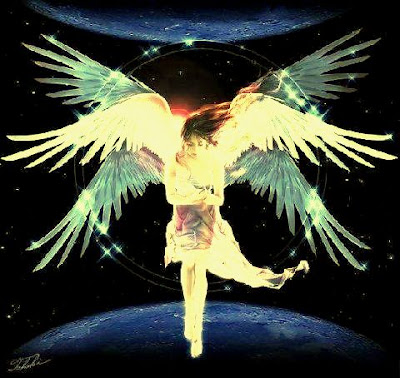 In a dark light I stood between two worlds, one below and one above; one full of pain, self-rejection. The above hovered nearer and nearer until I could feel its love. A strong positive rush of warm air circulated and wings began to unfurl; six beautiful wings I had. And they were light and bright and my peace swelled as each feather detached from the cares of this other world. This other world which sought to hold me down; sought to daily fill me with negative blood for circulating and coursing through my veins. A poison so strong I would require others to help me reach release.

A light from behind me began acting as a dryer for the new dampened wings. They lifted more and more as the light shone brighter against my back. I reached out in the dark, arms first, then each pair of wings separately. Three glorious pairs of wings, what was I indeed?

I remembered, as a child at seven years old, meeting the three angels in my backyard. One spoke, one wrote, one continually smiled, but I did not know anything more about them. We communicated mind to mind, but I did not know what that was about either. Sometimes I still hear them. Though I have not been able to see them, I hope to some day. I would like to know what they told me, as I have forgotten.

My wings completely dry I begin to rise and move freely. I can move away from the negatively now. The other world appears dark to me now and is disappearing even as I watch it. The world of promise and positive living is warm and draws me near. I go. I go.
Posted by Dixie@dcrelief at 8:05 PM