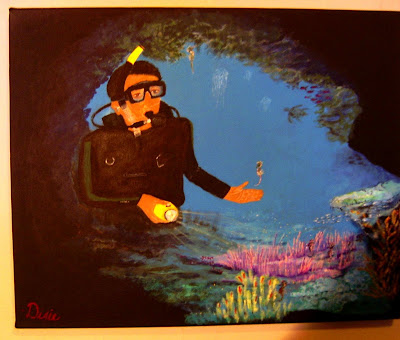 The painting: “The Diver and the cave”, by dcrelief

After many years of a medicated life and feeling numb to anything or anyone, I finally chose to come off of the medications and take my chances on finding some normalcy again. Yes I had some issues that had plagued for a long time that needed addressing. And I also found out that I had an illness called Fibromylagia which had induced my original depression. I wasn’t clinically depressed; however the damage done by the medications left me without a life. My mind fought hard to regain the cognitive abilities and my body, so racked by side effects, would never be the same.

Along came the day I decided to take up painting again and I wanted to do a study in black backgrounds. Reflective of my feelings at that time, black was invisible, which is how I felt. Since then black has come to be the very show piece for allowing my paintings, pictures, and photos to “pop” off the page.

This first painting called, “The Diver and the Sea Slug” was so easy and yet I spent three days fighting my insides, screaming at me, that I could not do a painting. I decided to just blank out my thoughts and let the brush and colors flow as they would. I soon learned that divers always travel in pairs! Thus along came painting number two: “The Diver and the cave”.

I did the painting for a friend and his wife, using a combination of photos they had. I listened in amazement as they told of the things they had seen underwater; the precious view they had developed for all life. From the tiniest sea creatures and larger mammals traveling great oceans, to the very divers in their group, each form of life has a place in the great cycle of existence. Though some may disappear and new ones come along, it behooves us to appreciate all life.

Hmm, each form has a place? I wasn’t sure of mine but this was a beginning thing to find me, and see what I could be… again… anew.
Posted by Dixie@dcrelief at 4:06 PM