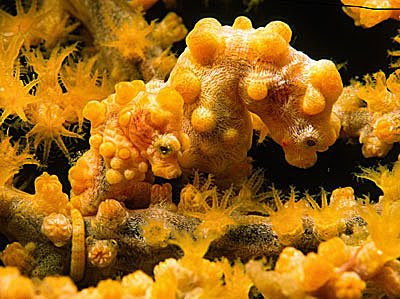 I’ve long held a passion for the creatures called seahorses. Until I touched one and looked “him” directly in the eye, I knew nothing. In that very instant I knew the meaning of the universe: to give and be given to.

Several years ago I was walking along a shore at the Outer Banks of North Carolina. It was a blustery March day and I walked facing the sun to feel warmth upon my face. In the water lay a smallish dark green lump I thought to be seaweed. I removed a glove and scooped up what was a six inch seahorse! He was so still, I thought at first it was dead.

It lay there, and then a tiny contraction in the tail caught my attention quickly. I soon realized the water in my hand was almost gone and the seahorse was looking for more water; its home after all. I spoke aloud, “Are you alive?” As if to answer, “Yes,” it raised its head, which looked just like that of a great steed, and looked directly into my eyes. I could see the soul of the tiny creature as the last couple of drops of water approached its nostrils. I had to act quickly.

Into the ocean I waded some ten feet, water up around my thighs. Gently I placed the tiny seahorse into the area before the tide approached. I hoped this would give it a chance to survive, without being dragged back in by the undertow; the same undertow I was beginning to feel at my ankles. The tail kicked and off it went. I turned to wade out, so elated by the look on that tiny face. Such trust and love that emanated; I cannot explain it. In the moment I was so glad it would not be part of my beach treasure, but would continue living. It wanted to live.

Another thirty or so feet down the shore, and I came upon many seahorses that had already died, and were stiff upon the sand. A lady was collecting them as decorations for her shop artistry. My heart jumped to my throat, but she explained that it was “their season” to come and die upon the beach. She handed me one about 2.5 inches long, nowhere near the size of the one I’d just returned to the ocean, yet the same form and color as the other. That “light” was gone from the eyes; this one having come in and embraced the season.

Today I look at the eyes of little lives; they tell me a lot about myself.
I want to live.
Posted by Dixie@dcrelief at 7:25 AM