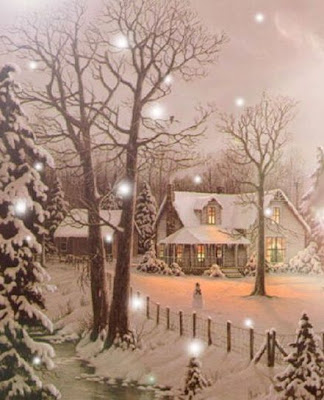 When I was a child, pictures like this were everywhere. Soft glowing homes casting shadows on the lawns; maybe there was snow and a snowman in the yard. A large picture window displayed a huge tree, obnoxious to today’s green crowd. No lights on the trim of the home, just happy healthy glowing windows that told of everyone’s presence.

I’d bundle up, run out to my favorite tree and climb it; catching snowflakes on my tongue until I got a big enough taste, to taste the snow. More, more snow, I wanted more snow than the ground could hold. My little red coat allowed me to be found even when I hid so well that time behind the old grape vine. One, two, three, you’re out and I climbed my tree and watched the shadows dance on the snow.

Family and friends gathered around and in every room of the house; when would they all leave? They would come to the windows to see the snow and their shadows would cast outward and ruin my image of the blue fairy next to the water pump house. Go home and I can go to sleep and when I wake I can open something wonderful. Go home now.

Rubbing my eyes, almost knocked back by the siblings, I search for my glasses to begin my trek to the living room. There stands the most marvelous tree in the world. I helped pick it out and the ribbon for the packages matched the green boughs that held shimmering balls. Paper was already being strewn around the room and watch up for whirling toys. One brother got a little metal car with foot pedals. One brother got a huge heavy metal airplane with black wheels. Where was my train? I looked but there was no box. In a small chair sat a doll. A large doll and I reached to touch her. I could feel the coldness coming off of her arm. Dear lord, she was dead. I was so repulsed I could not believe it. And where was my train I’d asked Santa for? And what do you mean, “Trains aren’t for little girls?”

I had lots to think of, went to my room and dressed quickly. “Trains were not for girls. Dolls were not for boys.” What did that mean? What was I? Was I a boy, wanting a train or a girl, wanting a train? What was the difference? Did it matter? It must have, because the very next Christmas one of my brothers got the train I wanted. (But I wouldn’t know about that until the next year, right?)

Feeling tearful and a bit let down I fled the whirling toys of the whirling boys and hid in my tree. I wore my old brown coat so no one could see me in the snow. I was just a shadow. I was just a shadow of too many things to come that would repeat this same scenario; “you’re a girl and girls don’t do that; girls don’t get that.” My Mom called all to a big brunch, stepping out onto the porch, called me from my tree.

My Dad said I couldn’t go back out to the tree the rest of the day. I needed to stay in and enjoy family. And did I like the doll that Grandmother had picked out for me? The look on my Mom’s face said it all. (Like: “Did you forget Santa signed the card?) I was elated! My joy returned in full measure as I realized that Santa didn’t bring me the doll after all. So what did he bring me?

Christmas snow! I sat there and thought, wow, he answered my wish. I’d told him on Christmas that I’d be happy if all I got for Christmas was snow! When I was a child pictures like this were everywhere!
Posted by Dixie@dcrelief at 12:07 PM