Seriously... out of touch! 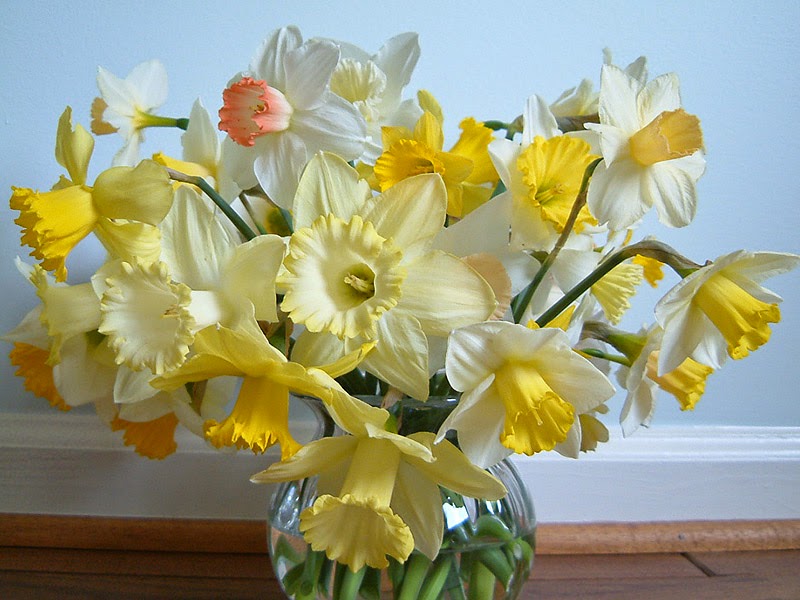 There's a tree company working in my neighborhood. Their goal is to take out trees, or limbs that interfere with power lines. They're giving away free mulch. Two other neighbors gave my name as someone interested in taking the mulch off their hands. Sweet!

I made arrangements to have them deliver on Saturday. Three dump trucks, fully loaded arrived!!! It was a big surprise, and men were everywhere, unloading these trucks where I asked them to dump the mulch. The supervisor apologized for not having any more, until Monday, the 30th. I told him I'd see him on Monday. Oh why not?

After the trucks left, I knew I'd better assemble the 'troops' to help me spread mulch. As I headed for the door to make the call - my little friend in the neighborhood walked over with... a big bouquet of daffodils in one hand, and a pitch fork in the other.

You know - I love flowers but I was more excited to see he had a garden tool! Help me out here. Does it mean anything serious when a gentleman brings flowers? I really don't know about entanglements... but I know he's got the arms to pitch some mulch!

Later he wanted to take me the local chicken drive through. I know it sounds funny, but they have great food. I had money and was going to pay for our dinners, but he was dead-set against it. By today's standards, am I in trouble now? And if not, do you think it's okay to let him come over and mulch some more?