the child, the Godmother, the cardinal ~ 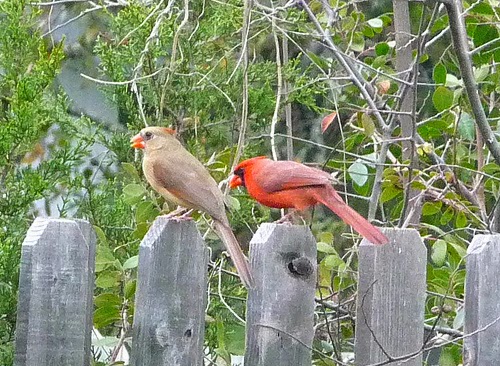 She was a very special friend of my Mom's. I decided to adopt her as my Godmother. Everyone else in my family had one. Why not me? My Mother was shocked at my boldness, but Audrey loved it. She was thrilled to be adopted. I was thrilled when she excepted.

She and my Godfather loved Cardinals. There must have been hundreds of little statues, towels, and all the usual extravagance of an avid collector. Gifts to each other were often something related to 'their' bird. In the year of his death, a tiny pair of earrings for her Valentine's, and a Red bird tie for his. He told her, "Whenever you see a Cardinal, know that I am near."

For eighteen years any time she had a worry, a Cardinal would appear and she'd say, "There's Bob; things will be okay." And indeed, they would be.

The day she passed I felt so alone... like a part of me went missing. I didn't realize the true closeness we'd come to know. Often that's the case. You don't know how much someone means until they're gone. At home from the funeral, I sat out in the gazebo, not focused on anything. Spring birds were all a-flutter... going for my feeders. But on the brick wall close by sat two lovely Cardinals - male and female. I remember thinking... it's Spring... why are they here? A warmth began traveling from my insides to my outsides. I knew why... and in that instant they flew away.

It's now been four years, and today would be her birthday... and often when I'm a bit worried, I see a female Cardinal perched nearby. It never leaves until I smile... and I can never hold back.(smile)

I was only six years old when you were were twenty-nine.
We soon began a happy voyage with waves that marked our time.
You became the 'godmother,' and I was thrilled to be,
a part of life that gave you joy, like joy you gave to me.

Then off you went to higher plane, while I remained on ground.
When morning birds begin their day I listen to their sound.
Your voice is often calling me, reminding of our love.
That's when I see your cardinal, perched in the tree above.